As you can see from the famous carpet at the PDX airport, I spent the last week in Portland to visit #FORCE2016, the annual conference of FORCE11 that drew around 500 participants in. If you’re confused by the naming: the organization’s name includes the year it was founded in. Sunday was set aside for a whole day of workshops with more hack/curate-a-thons in the evening, and Monday/Tuesday did offer space for talks, panel discussions, posters and workshops.

My Sunday program started with a workshop on Storytelling Through Visualization, which sounded pretty cool. After all, who couldn’t benefit from better visualizations to improve the way we’re telling our science? Unfortunately the workshop turned out to be less workshop and more lecture and demo of how awesome the new media visualization lab at Oregon State University is. Which is fine, and they seem to do a nice job. But if you have a room full of people who want to learn how to tell their own stories in a better way this isn’t really ideal. Especially if your advice boils down to “you guys shouldn’t do visualizations on your own, pay experts like us for doing it”.

Sketching the commons at #force2016 pic.twitter.com/yAAKvmM8yw

Luckily the Sunday afternoon was much nicer. I went to the Defining the Scholarly Commons workshop, which basically was an extension of the Madrid Workshop on the Commons. It even included the same fun icebreaker of playing the more team-oriented version of musical chairs. At least to me it seems that there is some consensus of what the scholarly commons should be: Not a set of technical infrastructure, but rather a set of guidelines and moral principles around how we structure this abstract thing. Which is something I really love, as discussing tools and platforms gets so boring and is ultimately always bound to fail.

The results of this small workshop and the last one in Madrid definitely make me look forward to see what the next workshop on the issue will bring. The diverse and extremely motivated group I encountered at both events make me really optimistic.

The conference-part on Monday started with a great session on how to effectively communicate your research and how to tell these stories in a way that’s approachable for a wide audience. Especially the talk by Cesar A. Hidalgo and the interactive session by Christie Nicholson (how do you explain a newspaper article on Baseball to people who know nothing about it?) were basically the kind of advice I had hoped for in the workshop on Sunday. The Baseball-example was really fun to see, as newspaper articles on sports are just as technical and impenetrable to outsiders as much of the scientific writing we do. (Plus: It’s good to see that even US citizens struggle to explain this weird game).

My #force2016 talk, on paper. Featuring mad scientist-me. Thanks to the awesome people of @visitflatland! pic.twitter.com/ADp7RCtlh2

The afternoon brought the session Data by the People, for the people, which was one of the main reason for me to come to FORCE2016. I presented our work on openSNP and how we are trying to put the data each of us is already collecting into the commons, enabling citizen science and academic science alike. There should be some video recording of it later on, but for now you can find the slides at Figshare. In the same session Melissa Haendel presented the work on Phenopackets, which is highly relevant to my own work. Phenopackets is a standard to make phenotypic data exchangeable, which will become more and more relevant in the future, but isn’t too easy to do. As she rightfully pointed out: Bioinformatics is already messing up representing DNA in file formats and that boils down to having only 4 letters to take care of. So measuring humans is orders of magnitudes harder.

Another great contribution and extremely relevant to openSNP was the talk Overcoming Obstacles to Sharing Data About Human Subjects by Robin Rice, which covered basically all the ethics issues we’re faced with. Erick Turner’s talk on Peer Review After Results Are Known touched on the topic of p-value manipulations and the issue of hypothesis after results are known, which the statistics fan in me really liked. Because in the end all these things lead to lots of statistical artifacts and irreproducible results. As a closing event for the day there were poster presentations, where I had the chance to present the work of repositive.io, as no one of their team could make it to Portland.

Large parts of Tuesday were set aside to presenting the progress the different working groups inside FORCE11 had made over the last months. Which I found really useful, as I’m still rather new to the organization and understanding the internal workings of it isn’t exactly easy. Additionally there was a great session on the global creation of knowledge, highlighting the importance of diversity. I was especially impressed by the work done on the virtual herbarium of plants and fungi in Brazil.

After the conference ended, I then also took the opportunity to meet with students of the OHSU. Alongside Mark Hahnel of Figshare and Philip Bourne of the NIH we discussed data sharing with a huge group of students over coffee and doughnuts. Which was great fun. From my perspective it seems that more and more people are joining such events, which is a testament that open science is indeed making progress. 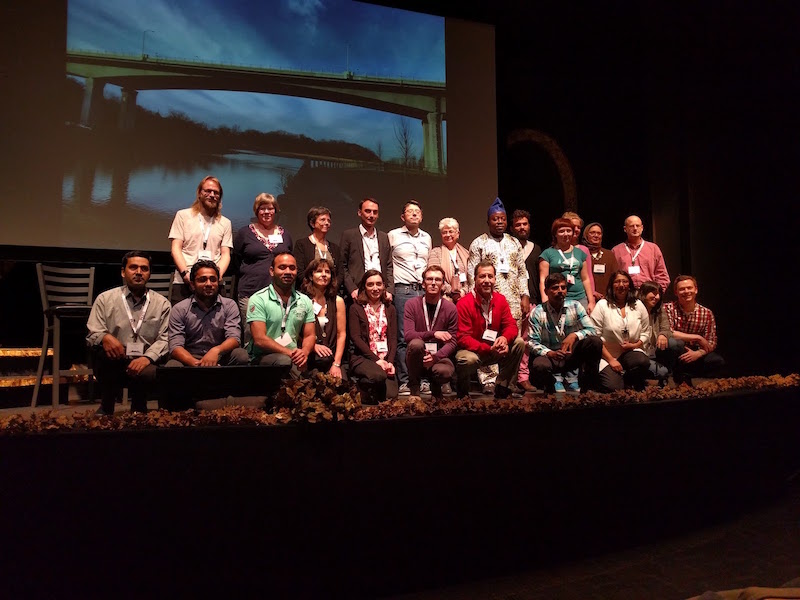 I had a great time in Portland and especially at FORCE2016, it’s always fun to meet so many people working towards the same goals, coming from so many different places and directions. It’s not only enabling new collaborations, but also a good source for so much motivation to keep working. So all my thanks go to the organizers of FORCE2016, not only for the conference in itself, but also for making me a fellow, thus enabling me to join the conference and putting me into this diverse group of dedicated and awesome people who are working on shaping the future of scholarly communications at large.

Even if you’re only somewhat interested in those topics, you might want to take a look at the slides and posters on Figshare and the recordings of the sessions should be online soon.